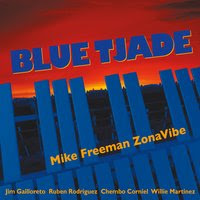 "The soul of Cal Tjader smiles at this very special tribute dedicated to him
his colleague vibraphonist Mike Freeman...from years ago Mike Freeman ZonaVibe
takes hold as one of the most innovative improvisers and composers of the moment
having as a weapon of expression vibraphone and marimba, over which it has a
unique skill ", Luis Raul Montell - Jazz Caribe

A significant fact is that all music is composed by Mike Freeman ... That as bandleader has a sidemen first line ... that Mr. Freeman is located within thirty best Latin Jazz vibraphone players of all time.

Mike Freeman has been hailed as a "master soloist”, a "superb" vibes player, and “wildly talented” for work with his own groups and performances as a featured member of other notable groups. Energetic, rhythmic, soulful, and melodic, Mike’s performances have taken him from North America and Europe, to the Azores, Caribbean, and South America. His six recordings of original music (ranging from jazz, Latinjazz, salsa, Brazilian, fusion, and R&B) have gained national and international attention including Grammy and Latin Grammy consideration and extensive radio airplay, charting on jazz, contemporary jazz, and world music radio. Mike Freeman & Spellbound's 1985 self-titled debut recording was followed by the drive-time success of “Street Shuffle.” “Wiggle Stomp" reflects a deeper immersion into the Latin music scene that, for him, began in the mid-1990s. On “In the Zone,” Mike brings salsa forms into a jazz context. "The Vibesman" 2012, takes that exploration further with a set of music that captured the attention of many. His newest production “Blue Tjade” blends some of his early writing styles into clave-based music.

Mike is also widely known by fans and audiences in the Bronx, Spanish Harlem, and elsewhere, for his work and recordings with several acclaimed Latin groups. He was part of Lucho Cueto’s all-star group Black Sugar, which gave blockbuster performances for thousands at the Toros Y Salsa Festival in Dax, France, and at the Festival Internacional de Salsa in Lima, Peru. The vibes behind the name, Mike has worked extensively with legendary percussionist Ray Mantilla’s Good Vibrations Band (with Edy Martinez), which has toured Italy far and wide. "Good Vibrations" (Savant Records) was Jazzweek's top Latinjazz recording on radio, 2006. A highly anticipated co-led recording project with salsa singer, and longtime colleague, Julio Salgado (from the Conga Kings) is also slated for release. Mike was often heard with Son Boricua (Jose Mangual Jr. and the late Jimmy Sabater), which performed for large gatherings at salsa congresses in New York, L.A., and Atlanta. Jose Mangual Jr.'s Boricua Blues formed after Jimmy's passing. His vibe work can also be heard with Mark Holen’s eclectic Latin blues band Zambomba and he was part of Jorge Jimenez’s salsa group Timba Vibes and created the book for the group. He performed with the Spanish Harlem Orchestra (directed by Oscar Hernandez) at Madison Square Garden and with Willie Villegas's Joe Cuba Sextet for New Jersey's salsa congress both with legendary sonero Cheo Feliciano. 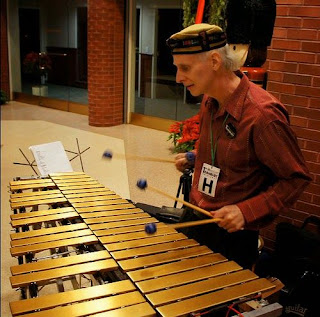 Master classes and arranging: Florida International University, New York University, Ithaca College, and the Berklee College of Music have hosted Mike as a guest artist/clinician. His music arranged for big band has been a successful component of his performances with jazz department ensembles. Mike wrote a series (spanning eight years) of commissioned compositions and arrangements for the Chicago Symphony Orchestra’s Percussion Scholarship Program. In 2014 he was commissioned to write arrangements for a new percussion curriculum for the country of China that were performed by members of the Shanghai Symphony at Shanghai Symphony Hall.

Born and raised in Omaha, Nebraska, Mike Freeman began playing professionally at the age of thirteen. He started learning drums at five and became interested in jazz music by listening to drummers Buddy Rich and Max Roach. He played in local rock bands and a big band called Resurrected Swing. At twelve, he began playing the vibraphone, and by fifteen, he was a percussionist for the Omaha Symphony. He also gave lessons at the local music store. During his last year of high school, he began traveling to Chicago to study with renowned percussionist and veteran studio musician Bobby Christian. Just before entering the School of Music at DePaul University in Chicago, Mike started to concentrate on the vibraphone and composition. In college, he began leading his own groups, performing at clubs, both in Chicago and Omaha, and working as a side musician. At DePaul, he studied with jazz pianist Alan Swain and saxophonist Tom Hilliard, and received a Bachelor of Music (composition) with high honors in 1981. In New York, where he’s lived and worked since 1981, Mike studied with composer/arranger Hale Rood, who wrote for Louie Bellson, and attended the BMI composers workshop.

Music in the family: Mike’s grandfather was a drummer and leader of Ron Freeman and the Melody Masters, a popular band that was heard on the radio in the Midwest. Neal Hefti played in his band before becoming famous in California. Mike’s paternal grandmother sang and played the organ and marimba. His maternal grandmother was a talented piano player in her youth. Mike’s father, Harry Freeman, worked his way through college playing the saxophone.

This video was the 'rumba' friends who armed themselves to Mr. Freeman the day of his 50th birthday, at La Fonda Boricua...What kind of friends...gozalo!: