"All in the Family" new CD George and Chico Freeman 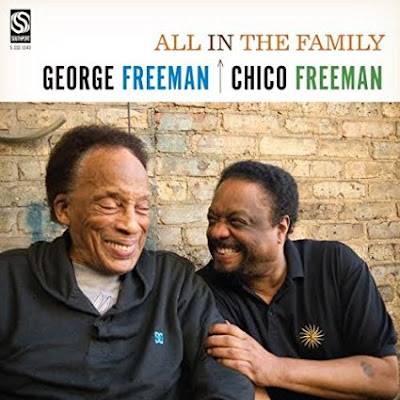 "All In The Family"
Brings together two members of Chicago's Freeman family that have never been recorded together until now: legendary guitarist George Freeman (who celebrated his 88th birthday on April 10th, 2015) and world-renowned saxophonist Chico Freeman (George's nephew and Von Freeman's son.) The musical legacy of Chicago's Freeman Family continues on with "All in the Family." Certainly, the late, great leader of the family, tenor saxophonist Von Freeman is smiling somewhere today!

All of the tracks are original songs (with the exception of the haunting "Angel Eyes") and feature compositions from George Freeman "My Scenery" & "Vonski"; and from Chico Freeman"Latina Bonita" & "Essence of Silence"; along with several short Improvisations, that provide a compelling flow to the recording. "Five Days in May" features percussionist Reto Weberon the 'hang' - a track that should have everyone up and dancing with joy!

A lifetime of music, from playing with Charlie Parker to Gene Ammons and his many fine recordings, George Freeman was recently selected as Chicagoan of the Year in Jazz by Tribune Arts Critic Howard Reich! Chico Freeman's career has taken him from his early years with Chicago's AACM to Earth, Wind and Fire to performing and recording with legendary musicians in New York, including Elvin Jones, to today's International Jazz Festivals.

"My parents, rest in peace, we instilled the family first. Now we hear that George and Chico Freeman is a funny elevation, divine excellent music and family as the fusion works".
Luis Raul Montell - Jazz Caribe

Let's all enjoy this little presentation of "All in the Family":